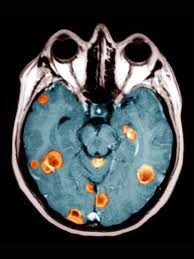 I dreamed last night that I had brain cancer. I underwent some radiation, but the malignancy was diffuse, kind of like the photo. I was referred to the fictitious "John F. Kennedy Hospital" in DC to undergo surgery by "the Germans," who were apparently good at this thing. My German, a slightly plump man with salt and pepper hair, dark upward curled eyebrows, generous lips, and glasses, asked me about advance care directives. I responded that I didn't want to be on a respirator and that no heroic measures should be taken. When I asked my German about my overall and disease-free survival, he shrugged his shoulders.

I don't believe I have brain cancer. When I think about dreams like this, I think about time. Could I leave my life tomorrow satisfied, even though the novel's not finished, I've never been to Tokyo, and I haven't surfed? I think about how utterly un-spontaneous and frugal I am, saving money rather than planning on nice vacations or cable. I think my lack of spontaneity, in my mind, is an acknowledgment of how little time I have, how much there is left to do, how there's no time to eff around. Although I'm sure others would think differently.