Carolina on My Mind 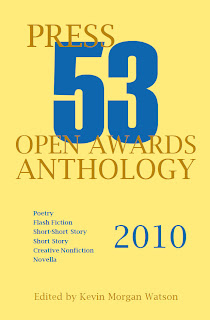 North Carolina, that is. Tomorrow the missus and I will drive down to Winston-Salem, NC, for the Press 53 Wine & Words Fest in celebration of Press 53's 5th anniversary. The winners of the 2010 Press 53 Open Awards contest will also be honored. I'm excited that MAY-SEPTEMBER placed first in the novella category and will be picking up a bunch of 2010 Open Awards anthologies, so if you're interested in purchasing one or reviewing MAY-SEPTEMBER, get in touch!

If you're interested in the actual ceremony,it's 6-9 pm at the Press 53 headquarters in downtown Winston-Salem.

I bought some candy for 8-hour drive trip but have already eaten it. That'll teach me to try and plan ahead. At least with candy—I won't buy Halloween candy until October 20th, even though it'll probably be five dollars a bag. And I'll have to buy something I hate, like Three Musketeers or something. Not that I wouldn't eat one if I was starving. Or if you happened in put on the table next to me.