I like it because, despite all the new condo development in the past ten years, there's still a lot of of the old port city to see. When people think of the Inner Harbor, they think of Harborplace and the constellation and not the old Baltimore, as shown, rather unconvincingly in this backdrop in Hitchcock's Marnie: 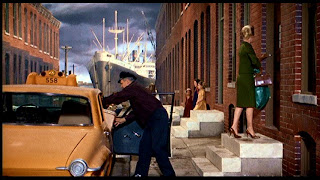 But it does still exist. On many days you can see clipper ships: 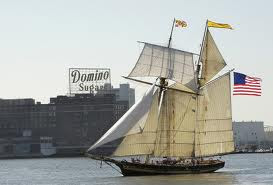 And, of course, The Baltimore Comfort, the Navy hospital ship that is always in and out of port, whether to aid in wars or natural disasters like Katrina: 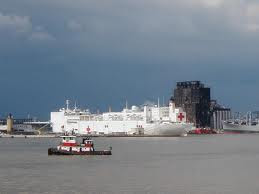 But my favorite ships are just the ordinary working ships you see as you jog on the promenade. (This is actually the Japanese ship Kashima, that docked in Baltimore this past summer as part of a training squadron.) 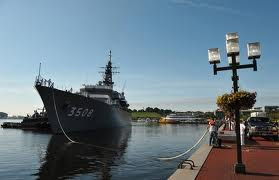 I don't think much about writing during my jogs. I usually don't think about anything, except how far I have to go and how I'm breathing. But this clearing of the mind enables me to work better when I do sit down to write. At least, I'd like to think so. And not everyone can take advantage of such gorgeous outside landscapes. Another reason I heart Baltimore
Labels: Baltimore Harbor Marnie writing