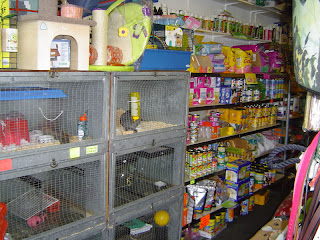 I dreamed last night that my brother and I lived in an abandoned pet store. This was after the war and people tried to live in high, enclosed spaces because of the dogs that bristled in corners at night, their broken teeth stained with fat and blood. In the viewing room of the pet store we removed all the cages, and eventually we put things there. We glued glass shards collected from the lip of the broken sidewalk outside onto the ceiling and dragged in a kiddie pool we found in the abandoned developments. We lined the floor with sticks and dirt and grass and leaves until we made a thick carpet of forest.

Then, the work began. The decomposed things, the birds and rats and an occasional squirrel or apossom, were placed in one edge of the viewing center. A vial of sea monkeys we found in a unused packet at the old toy store went in one of the old aquariums. We fed the viewing room with garbage, sour and black and ripe with juice, and at night we listened in the dark to the sounds of things, of maggots and weevils and fermentation, the pop and hiss of our salvation.

We did not know how to make animals, but they came nonetheless, attracted to the smell of life, pointing their noses in the pile of dog leashes in the corner of the store, their toenails clacking across the linoleum and pawing at the door of the viewing room. Eventually, for safety we moved the viewing room into the store and we ourselves moved into the viewing room. We lived and slept in the enclosed space, watching the scene unfold behind glass, our own 24-cable channel, museum exhibit. I wonder if they watched us, too.

I think this dream almost wrote the story for me! Now I need to fill it in and find an ending.