The Bronx Is Having a Fire Sale 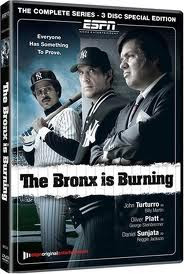 We finally started the watch the ESPN miniseries "The Bronx Is Burning." Fortuitously, the complete season was available on DVD at Ollie's for $2.99. I have been wanting to watch this series for a long time, and last year I even read the book (by Jonathan Mahler) on which it was based. Two episodes in, so far, so good. The cliffhangers/serialization are effective, but even so we managed to stop the DVD after watching only 2 of the 8 episodes.

Serialization is not too hot right now in the literary world; if you want to get a part of your novel published, it'd better be totally self-contained. But I have always felt that this works against generating interest in your novel. If there's no desire on the reader's part to find out what happens next, why will they buy your book when it's eventually released? Conversely, I know the dangers of allowing authors to submit chapter excerpts to journals: there are very lax, broad definitions of what constitutes "self-contained" among the writing community (or even interesting, for that matter).

As you may have guessed, I live under a rock on the far outskirts of pop culture world. We don't have cable or Netflix, although I do keep a Netflix list of movies I'd like to rent in the event we ever got Netflix. (I've been keeping this list for more than two years.) My theory is that, if something is good enough, it will find its way to me eventually. Like "The Bronx is Burning" on the bargain table at Ollie's. Or the seasons of "Arrested Development" and "True Blood" we were given as gifts.

If my trickle-down theory doesn't work, I could always start a new blog called "Jen Michalski's Rock." It will consist entirely of comments from people that begin "Jen Michalski, do you live under a rock? Why havent' you read/listened to/watched...?"