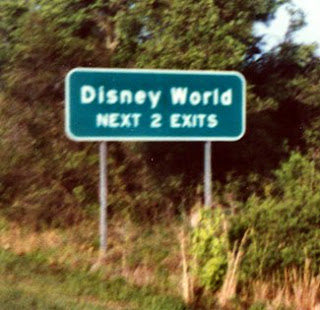 My girlfriend dreams that my novel will be published; I dream that I am adolescent, failing a bunch of seventh-grade aptitude tests and get lost taking a road trip in a stolen 18-wheeler to Disneyworld (I accidentally book a hotel in California, near Disneyland and am halfway across the country with a friend before I realize my mistake). I wonder how I can fail a bunch of aptitude tests but figure out how to drive a truck. I read a short story once as a teenager, when I had just discovered Salinger and the Best New American Short Stories in the library and that The Rolling Stone published short stories but that they were kind of terrible (ie, Jackie Collins' "The Lifeguard and the Rock Star"). The story was called "Disneyland," and instead of the family in the story continuing to make preparations for their summer vacation Disneyland, the father becomes obsessed with building a fallout shelter in the backyard. I loved the juxtaposition of the themes. I thought it felt vaguely like my life. I wanted to write stories like that. I thought, you will never run out of pain. Therefore, you will never run out of short stories.

My mother wants to go to Disneyworld at the end of the year. For her sixtieth. She is one of those women who could go every year if she could. She never gets tired of the animatronic smiles and big lollipops, of collectibles. I want to go under the park, see what makes this strange, perfect world tick. Where its heart lies. Who pumps it up.