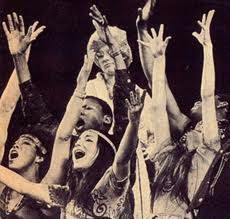 The college kids came squeezed into Volkswagens and old Lincolns and Chevys. At dusk the eyes of their headlights opened and Johnson watched them come down the road, one after the other, a caterpillar from which guitar music, noodley and upbeat, spoke to the crickets and barn owls, who replied in puzzled staccato. He waved the cars into lines to the right of the farmhouse, and the kids emerged with blankets and picnic baskets and bottles of wine.

At the entrance to the barn Elizabeth-June took suggested donations; inside, Garcia and the band tuned their instruments and Cloud served vodka and fruit punch for twenty cents a cup. When the cars stopped coming Johnson went over the Elizabeth June, who smiled at him while she straightened the mostly one-dollar, sometimes five-dollar, bills and laid them in a cigar box. She was not Kate; she was pale and freckled with a small nose and green eyes; from her accent, Johnson guessed her to be from the Carolinas. She had broad shoulders and he wondered whether she could have played basketball in high school. She took measure of things but did not challenge his thoughts, and her impulsiveness contented itself with moonlight walks across the field, listening to the gentle bristle of the neighboring farm's corn against the sky.

But something moved through his skin and into the chamber of his chest when she was close, and he thought he saw that same thing, a simmering viscous liquid, move through her. It may not have been the sharpest current that had ever crossed into the vast, impenetrable land of him, but it had crossed and stayed. He did not know what it all meant for him, with the bones of Maggie still in his bones, clattering around like pots, the bead of sweat between her eyes as she languished still sitting hot in his stomach. What would she think of him for being attracted to someone else, after she had taken care of them and she had grown old and he did not and she slipped away and he stayed?

They went in the barn and sat cross-legged in the corner, where the hay was highest and freshest. Lanterns hung from the rafters, illuminating the stage with tiny whorls of light that swayed back and forth. Johnson wondered how they could play in the near darkness. But the music started, from seemingly far away, a hush that grew until it was heavy, oppressive, before it flitted away.

The crowd did not cheer; the music did not lend itself to cheering, or even dancing. Johnson was not sure it could even be called music. It carried him in waves, and as soon as he felt it stranded him in one place for too long, Garcia and the others seemed to come to the same realization, and their fingers moved lazily like fireflies across their fret boards. Johnson drank the vodka that Cloud gave him and closed his eyes. Elizabeth June's hand slipped into his, and he concentrated on the sensation of her skin on his, her heartbeat tapping in his palm.

He had lived a half century, had died, by his count, twice, once by shrapnel, once by fire. But tonight he finally felt reborn. The past could not enslave him; the future, with its unending verses and choruses, of lovers and losses, could not daunt him. All that meant anything to him was the next note on Garcia's guitar. He tried to predict where he could go with the unfocused medley, was happy when he guessed right. When he did not, he opened himself to Garcia's thought processes, accepting his decisions as differences in friends' tastes often drove him, all the while noticing that Elizabeth June's hand now rested on his thigh. He thought of Kate, the spire that led from Montana to New York but had begun to fray here a little, a stop that hadn’t mean to be so long, so filled with strangers who felt like old friends, not the guys in the regiment or the smokejumpers—they were a different breed altogether, not an old breed, but a new breed of old friends.