jmmw fall nonfiction issue is up! 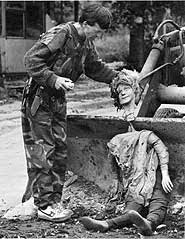 I'm really excited about our special nonfiction issue of jmww (fall 2011), which is now live. Edited by our nonfiction editors, Dario DiBattista and Girija Sankar, this marks our entry into creative nonfiction, and we couldn't be more excited. Check out these opening lines and you'll see why:

"Yellow. Their skin was yellow. They had dirt under their fingernails and their feet were dirty. There were six of them, all women, under the tarpaulin. Some of them lived long enough to have their wounds bandaged before they died. Some died more or less instantly as shrapnel or 7.62-mm rounds entered their bodies."—Yellow, by Ron Capps

I unlocked the padlock on the door to my small room in Varanasi, Uttar Pradesh, in northern India, slipped my shoes off, and took a step inside. I closed my eyes. Breathe, I told myself, before I turned on my heels and rushed to the bathroom I shared with the others who had rooms on that floor."—In My Shoes, by Brandi Dawn Henderson

"My son and I have been hiking our local nature trail since he was born. At first I lugged him in a backpack. During toddlerhood's wobbly days, I shadowed his steps, poised to steady each stumble. Beautiful today, early autumn, and the morning sunlight splinters between trees soon to shed their leaves. The sweatshirts that seemed necessary earlier are now knotted around our waists. The trail circles the local park, and through the brush, we catch glimpses of soccer games. The cheers of adults and children echo then fade between the trees."—On Not Believing, by Curtis Smith

"We have just finished our tenth game of pool when someone announces that it's naked time."—Girl in the Hall, by Amy Bernhard


"When I first heard a Beatle died, I felt mostly disbelief; it wasn't true, it couldn't be."—Paul Is Dead, and We're All Listening: Rumor and Revelation, 1969, by Ned Balbo

""Never Mind the Jubilee" runs a 2003 cover of the British rock mag Q, ridiculing the 50th anniversary of Elizabeth II's coronation. The directive relies on an allusion to the Sex Pistols—poster-boys for Malcolm McLaren's Sex Shop who became, in the late 1970's, the anarchist's anarchists with their legendary, grating performances and their only studio LP, Never Mind the Bollocks. As I browsed the local Borders, dodging shoppers who chat on cell phones or flip through paperbacks killing time en route to the adjacent cinema, I was tempted to agree: whether here in America or "across the pond," royal pomp and circumstance matter far less than "the true story of punk" in Q's 148-page special edition."—When the Bad Boys Ruled Britannia, by Jane Satterfield