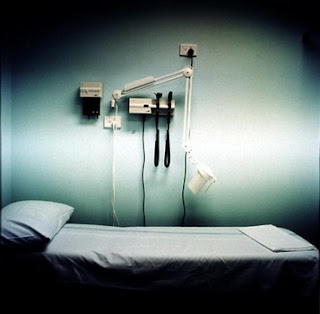 I crave routine, and as such, it's been difficult to get into any sort of groove this week. I haven't been running since last Monday; I feel as if I have the flu. I sleep in later, wanting the surrealism of dreams—at least Shirley was in one last night, although it was a rather pointless one of my brother and I relocating gold cars my friend W. had given us—hybrids of Volkswagens, Renaults, and Dodge K cars—across the ocean from his place in San Francisco. I suppose we needed them. I hope I feel well enough today to get outside or on the treadmill and move. It's not a weight thing—I lost five pounds when Shirley was sick, which under any other circumstance I'd be happy. But no matter how difficult, you have to take care of yourself when someone is sick. You have to be as strong for yourself as you are for them. You have to be even stronger for yourself.

I always wished I could live in a hospital. Which is funny, because I hate the smell of them. Not only are they portals, where great energy is exchanged in the constant rites of life and death, but they never sleep, either. It would be comforting to go to bed every night knowing that someone is always awake, watching over you. Perhaps it would be safer (and cheaper) to just live in a hotel.

Tonight your star is gone. It must have died so long ago, an inaudible sigh that may reach me tomorrow,

if I care to listen. This map, curling under my hands, my desperate realization

you are so far removed from your last known spot.