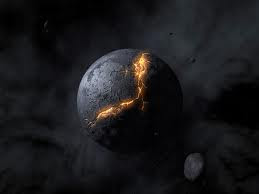 I saw a movie this weekend. It was like a planet hit me, and I haven't been the same since. Actually, in the movie, Lars Von Trie's brilliant Melancholia, a planet, Melancholia, is in a collision course with planet Earth. Of course, like most movies, it is not just about that. It is also about depression, incredible sadness that imparts such a gravity on your life that it becomes its own orbit, compelling the other planets around you (family, friends, lovers) to continually fight its pull or risk their own collision with you.

I hate feeling helpless. But for the past month, I have felt exactly that. Like a great planet has been hurtling at high speed toward me and there is nothing I can do about it. When my beloved Shirley died last month, I felt as if, as her human mother, I had failed her. Somehow, her symptoms of illness had eluded me (and also the vet, although I do not blame her in any way, as she did so much for Shirley, and in some ways, me). Despite what I thought were my best efforts, she slipped away from me, and I was not even prepared.

People slip away all the time, despite our best efforts to save them—family, lovers, friends. Some slip away by the design of their genes; others by a complete disregard for their fragility. The latter hurt the most. You watch someone you love spin away from you, a rogue planet, a runaway train, and your instinct is to always step in front of them, despite the impact it would have on you. But if you don't try and derail them, you spend the rest of your life derailing yourself on what you could have done, should have done.

Life is so full of regret. Every time you turn the corner, it smiles at you, the shiny unfurling candy wrapper in the gutter, the rattling stop sign on a windy day. A headless toy figure, faded by the sun. It seems so hard to go about your life after the collision. You think about the planet when it was still in the far sky, how small it was. You wonder whether you could have run faster, turned the axis of the earth, spun it out of harm's way. Or put it on your shoulders like Atlas and walked, one impossible step after another, away from the shore, before the tide engulfed you. There is no more puzzle, put you hold onto the few pieces you have until your fingers bleed.

I saw another movie this weekend, too. The Muppets. Of course, a happy tale about resilience and giving your dreams a shot, even if you fail. The important part is trying. So you won't have regrets. They seem almost at odds, these two movies, one telling you there's nothing you can do, the other that, above all, just try. You will fail but you can try. Make sure you are smiling your best smile at the moment of impact.