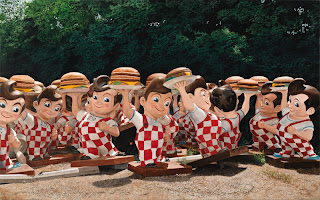 I started "Big Boy" with an idea that the Big Boy statue in front of the restaurant would be supernatural in some way, that the restaurant would be some way station from the nether regions of the Twilight Zone. That people, emotionally and literally would be trapped there after seeking refuge from the cataclysmic events of their lives. And I guess it still does, in a way. But in the original version I wanted Big Boy to eat them or something, maybe. He definitely existed, in my mind, in the uneasy space between symbolism and literalism.

There is an actual Big Boy restaurant (or was; I haven't been in a awhile) in the Delaware Welcome Center Travel Plaza in Newark. I love travel plazas, the same way I love hotels. I would love to write a story collection about one or both.

Thanks for Roxane Gay for publishing "Big Boy" in Emprise Review. It's always been one of my favorites:

When Emma disappeared at the Bob’s Big Boy at the travel plaza in Wilmington, she was wearing a knitted green cap that looked like a frog. This much Loretta remembered. Loretta also remembered the way the girl had spun in a slow circle behind her mother, Deirdre, examining with her blue saucer eyes the tired travelers who had descended upon the Formica and leather way station where Loretta worked. It was the Friday afternoon after Thanksgiving, one of the busiest each year, and Loretta was still seven hours away from the flannel sheets she had purchased earlier in the week for her and Larry at Boscov’s holiday sale. Deirdre, an angular woman with wan, penetrating features, had leaned over, digging in her red Coach bag for her matching wallet, blocking Loretta’s view of the three-year-old girl in the ski jacket.