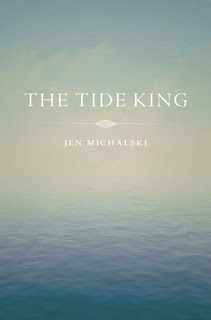 You can get a sneak peek at my forthcoming novel, The Tide King, at Roland Goity's awesome journal, Works (of Fiction) in Progress. We also talked a bit about the inspiration for the novel:

It was almost time to go. His mother would see him out the door but not to the train station. She would not watch him leave on the train, his face framed in the window, his garrison cap covering his newly shorn head. She would see him to the door, where he could go to work, to school, to the store, and in the corresponding memory of her mind, he would return. She opened the lock of the jewelry box on the kitchen table with a butter knife, the key orphaned in Reszel, Poland. He wondered whether she would produce a pocket watch, a folding knife, his father’s or his uncle’s, that he could fondle while trying to sleep on the hard earth, dirt full of blood and insides, exposed black tree roots cradling his head like witch fingers. He opened his hand, waiting. She pulled out an envelope, old and brown, and the dark, furry object he regarded. A rat carcass. A hard moldy bread. “Saxifrage.” She put the crumbly mound in his palm. “Most powerful herb. I save it until now.” He glanced at the leaves and roots spread over his palm, dried like a fossilized bird. His lips tightened. His whole life to that point a stew of herbs–chalky and bitter and syrupy in his teas, his soups, rubbed onto his knees and elbows after school. He put it back in the envelope, more fragile than the herb. “You take this.” She grabbed his palm, her knuckles blue and bulbous. “Eternal life. You take it if you are about to die. You will live. This is the only one. You understand?