Pushcart Nomination for "The Goodbye Party" 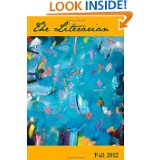 Great news from Dawn Raffel and the folks at the Literarian: my story, "The Goodbye Party," has been nominated for a Pushcart. Here's a teaser of the story, in case you missed it:

Alvin said he wanted to go to the goodbye party with Sam. They were on the subway coming home from Alvin’s school. Alvin wore the straps of his child-sized backpack around his ankles, the pouch part resting atop his outstretched legs. Sam had always told him not to do that, that they needed to get up and off the subway car quickly, but what Alvin said about the goodbye party stunned Sam into silence, and when the car braked at their station, he lifted Alvin over his shoulder and ferried him off, backpack hanging from Alvin’s legs.

Sam had not told Alvin about the goodbye parties, believing he was not ready to understand. Alvin had barely understood his mother’s death almost a year ago, although now and then he displayed such surprising resoluteness and peace about it that it had aged him, had made Sam feel like the child instead of the father, crying while making a peppered-turkey sandwich in the kitchen because he had gotten the turkey from the deli Elizabeth had loved.

But last Saturday, when Alvin had gotten up in the middle of the night, a bad dream, and found that Sam wasn’t home, he had asked his grandmother, who was babysitting, where his father was. Sam’s mother, not sure what answer would be acceptable to Alvin, and very annoyed at Sam for not accounting for this scenario (but only slightly so that she had not accounted for it), told Alvin to wait until his father got home.
It was a goodbye party for the dogs at the shelter, Sam had explained to Alvin later that morning, his eyes still wet, a burn in his left shoulder from cradling an 80-pound Rottweiler, Mugsy, whose eyes were root-beer candies, as the shelter employees had arrived. A goodbye party because they’re getting adopted.

For more, go here: http://www.centerforfiction.org/magazine/issue-10/the-goodbye-party-by-jen-michalski/
Labels: Dawn Raffel The Center for Fiction The Goodbye Party The Literarian The Pushcart Prize