On David Abrams' blog, "The Quivering Pen," I wrote an essay for his "My First Time" series about my first book love, Louise Fitzhugh's Harriet the Spy. 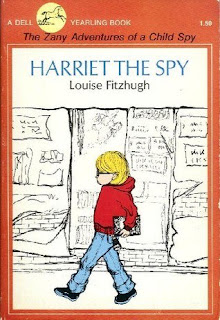 When I was younger, bands like REM, The Pixies, and Siouxsie and the Banshees crowded my mix tapes, and Salinger, Bukowski, and Kerouac lined my bookshelves. I thought I was queen shit. It wasn’t until I was older when I realized that the bands I listened to uncritically as a child, like Fleetwood Mac, with their perfect pop, emotional masterpiece Rumors and new-wave forerunner Tusk, influenced my music pedigree way more than the cool kids from Sire and Matador Records. And it wasn’t until I was way, way older when I realized the book that influenced me most as a reader and writer was not some Faulknerian or Russian masterpiece, anything written by Gertrude Stein, or even some stream-of-conscious beat paperback but a children’s book—about a girl who wants to be a spy.