I was reading a lot of Murakami when I wrote this. Good old Pindeldyboz (RIP) published it back in 2007, I think. 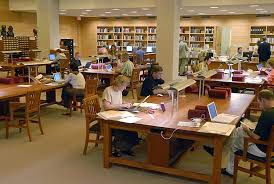 The librarians nudged and nodded at each other. The lady in question sat at a table in the periodicals section reading aloud slowly. She read with an intermediate tone and volume—not loud enough for other patrons to understand what she was saying, but loud and deep enough to affect a range of hums and grunts. Her index finger laboriously followed the words over the page. An hour ago, it had been Ladies Home Journal. Now, it looked to be Cat Fancy. The woman wore reading glasses with chains but otherwise looked indiscriminate.

The older librarian called their supervisor, using on the phone on the check-out desk.

"There's a lady in the periodicals department reading to herself," she soft softly but seriously while scanning in the newest Mary Higgins Clark novel.

"I'll be right here," said the voice on the other line.

The supervisor was a tall woman with striking white hair and squared-off shoulders that emphasized the round pouch of her stomach. Looking at the librarians, she nodded toward the periodicals department. The librarians nodded back in confirmation, and she was on her way.

"Excuse me." The supervisor towered over the woman, who was just finishing an article on Persians. "There's no reading aloud in the library. You'll have to come with me."

"What do you mean?" The woman squinted her eyes from behind her reading glasses. "I'll be quieter. And I'd take them home if I could, if you would let me check them out."

"I'm afraid you'll have to come with me." The supervisor placed her hand gently but authoritatively on the woman's shoulder.

"I'm not breaking any laws," the woman answered, flustered, even as she stood up.

The woman left the magazines on the table and followed the supervisor through a door behind the newspaper racks. It led downstairs to a dark basement that smelled of old books and wet paper. A fluorescent bulb, like an interrogation device, illuminated the gray cinderblock walls. Three children—two boys and one girl—sat on the floor holding children's books. Their eyes looked shadowy, as if they hadn't seen the light in a long time.

"These are children whose parents left them at the library," The supervisor explained. "Due to some archaic zoning requirements, we're not allowed to use the services of the local police department, so we're keeping them here in the hopes that they'll be claimed."

"So what do you want me to do about it?" The woman asked, wiping the sweat that formed on her palms onto her slacks. The children stared unblinking at her like bats.

"You're going to read to them," the supervisor explained, turning to leave.

"Well, I guess that's up to the parents, isn't it?" The supervisor smiled sweetly, almost in confidence, and closed the door gently behind her.

The woman immediately turned and shook the knob. It was locked. She looked back at the children. They stared at her. She smiled and wondered whether they would eat her. She noticed a piled of nondescript adult clothes, much like her own, neatly folded in the corner by some old metal shelving units.

She looked back at the children. She could sense, with a shivering degree of certainty, that they were hungry.