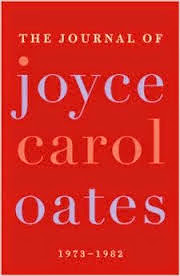 I had the good fortune of picking up The Journal of Joyce Carol Oates: 1973-1982 at a used bookstore when we were recently in Petaluma, California. I have always mined my dreams for images and ideas in my writing (ideas that sometimes are presented, fully formed, on a silver platter, only begging me to transcribe them), and I was excited to discovered that Oates uses her rich dream life as well:

"Dreamt just before waking of a teenaged girl who wept miserably....Who is the girl, who are her friends, why was she crying, what would happen next? (Though perhaps this is the very last scene of the story & I must not tamper with it.)" –Joyce Carol Oates, January 2, 1973

I dreamed last night that my family moved for my father's new job (this did happen once). But my mom settled on a house quickly, and it seemed, to me, anyway, that the previous family had not moved out yet. Only my brother and I noticed the women, older, matronly, unpacking our boxes in the garage and dusting the bare lightbulbs in the basement, the two sullen teenaged sisters who lounged in the living room on the couch watching television.

Who are you? I demanded to know from the woman in the kitchen unpacking our silverware. What are you doing here? Why don't you leave?

But the women would never answer, only shake their heads and smile. I'm your aunt, their eyes seemed to say. Don't you remember?

I'm the neighbor. I'm the housekeeper. The girls said nothing at all.

I bought sage, planning to burn it and cleanse the house.

We could talk to them, my brother suggested.

But I was too scared. Good or evil, they were interlopers, ghosts, maybe, even though they were fully dimensional and solid. I stomped my feet and made a stink and pleaded for them to leave, leave, leave.

This is our house, I insisted. We belong now.

"My optimism today can't quite overcome the memory of those draining, bewildering drams. The irony: one can experience in sleep tortures that, in ordinary consciousness, would be profoundly traumatic. And yet one isn't expected to take them seriously....Madness, no doubt, begins in dreams. Ad spreads, and spreads, like oil in water." –Joyce Carol Oates, January 1, 1973