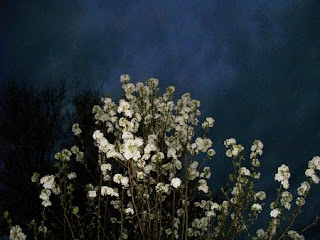 the passage over the river;
The current rushing so swiftly, and swimming with me far away;
—"Crossing Brooklyn Ferry" by Walt Whitman

When you're younger, the bad things that happen almost seem an anomaly, so rare they are between moments of great wonder and the luxury of youth—the friend who commits suicide or dies in a car accident, an older relative stricken with cancer, a beloved pet passing. But sometime in your forties the fat, succulent sun that's been warming your face, although not as strongly as it did in your twenties, dips under the horizon line almost completely, and suddenly what was once anomaly becomes a pattern, happens more often than it doesn't. One day you wake up and realize you've had the same pain in your knee for weeks that you assumed would go away, for it always did before, but didn't. The possibly occurs to you that it might never go away, that the pain is your new reality, along with the throb on your little finger. That because your mother died last year doesn't mean that you'll receive a multi-year reprieve on grief, that in fact many people close to you may become ill, or even die, within months or years of other tragedy. You may put down several pets in the space of a few months. You may have your own health scares while worrying about others.

Living in the bittersweet twilight, knowing that the small, hard oranges will probably outweigh the ripe ones from this point onward, and how to savor the juice from the few that you do find. Or, as that wise sage John Mellencamp once said, "They say life goes on, long after the thrill of living is gone."